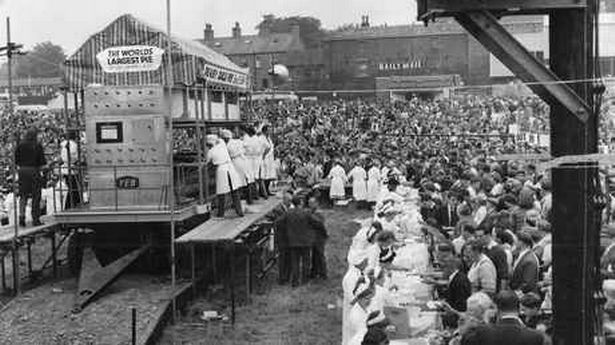 A historic local competition is announced to select the makers of the Denby Dale Pie, a real-life Yorkshire tradition to make the worlds’ largest pie.

On the verge of closure, bizarre pie-factory Humble Pies competes to make the pie, in one last effort to save their business. Their down-trodden and odd-ball workforce includes serial-dating simpleton Les and over-weight, cross dressing, former freedom fighter Mohammed.

Talented but wayward chef Richard returns to Yorkshire to find Humble Pies, where he learnt his trade, on the verge of bankruptcy. The odd-ball staff, once a second family to Richard, now want nothing to do with him due to his desertion of them at a time of crisis years ago.

Under new management, Humble Pies have abandoned their principles of high quality pie-making. They’re being put out of business by local tyrant Barnaby (known to most as ‘bastard’) and his pie-making empire.

Seeking redemption Richard starts to win round the Humble Pies team, restoring their passion and the belief they can defeat reigning champion Barnaby and save their business. Taking over pie-making with his gourmet pies, the Humble Pies misfits start to pull together.

As word of Richard’s pies spreads through the region they are short-listed against Barnaby. With the press publicising the contest and the local region supporting Humble Pies, it starts to look like they have a chance.

A series of mishaps from their clueless team threatens to derail their bid. Can the local community spirit and the gang’s unusual skillset help them win this David and Goliath battle with big business?

Earlier drafts of the Humble Pie script were developed with Nick Goldsmith, Producer of Son of Rambow, and it was selected for The Script Factory’s development scheme. The most recent draft was commended by BAFTA judges in 2015, and it was a finalist at the Screen Goldmine Competition and Blue Cat Screenplay competitions.